Marian Anderson "A Dream, A Life , A Legacy" 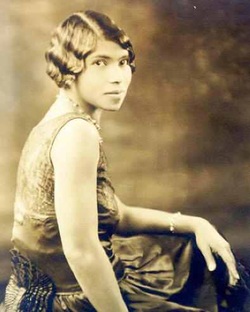 DATE OF BIRTH: February 27, 1897 – according to her birth certificate.
PLACE OF BIRTH: Philadelphia,  Pennsylvannia


FAMILY BACKGROUND: Marian Anderson  was the oldest of three daughters born to John and Anna Anderson. John was a  loader at the Reading Terminal Market, while Anna had been a teacher in  Virginia. In 1912, John suffered a head wound at work and died soon after. Anna  and her three daughters moved in with John’s parents, while Anna found work  cleaning, laundering and scrubbing floors.


EDUCATION: Marian attended William  Penn High School (focusing on a commercial education course to get a job) until  her music vocation arose. She transferred to South Philadelphia High School,  focusing on music and singing frequently at assemblies, and graduating at age  18. She applied for admission to a local music school, but was coldly rejected  because of her color.
Marian’s musical  career began quite early, at the local Baptist church in which her father was  very active. She joined the junior choir at age six. Before long, she was  nicknamed “The Baby Contralto.” When she was eight, her father bought a piano  from his brother, but they could not afford any lessons so Marian taught  herself. When Marian was 13 years old, she joined the senior choir at church and began visiting other churches; becoming well-known and accepting invitations to sing. She became so popular, she would sometimes perform at three different places in a single night. Finally she summoned the confidence to request five dollars per performance. In 1919, at the age of 22, she sang at the National Baptist Convention.
When she was 15 years old, Marian began voice lessons with Mary Saunders Patterson, a prominent black soprano. Shortly thereafter, the Philadelphia   Choral Society held a benefit concert, providing $500 for her to study for two years with leading contralto Agnes Reifsnyder. After she graduated from high school, her principal enabled her to meet Guiseppe Boghetti, a much
sought-after  teacher. When he heard Marian audition, singing “Deep River,” he was moved to  tears. Marian’s initial invitations to sing grew to actual tours, focusing on black colleges and churches in the South. William “Billy” King accompanied her and also served as her manager. Soon she was making $100 per concert. On April 23, 1924, they took a giant step and held a concert at New York’s Town Hall. Unfortunately, it was poorly attended and critics found her voice lacking. Marian was so discouraged, she contemplated abandoning her career choice. But shortly after, she won a singing contest through the Philadelphia Philharmonic Society and then, in 1925, she entered the Lewisohn Stadium competition. She beat 300 rivals and sang in New York’s amphitheater with the Philharmonic Orchestra accompanying her. This concert was a triumph and gained her the attention of Arthur Judson, an important impresario, who put her under contract. In 1926, Marian toured the eastern and southern states, adding songs to her repertoire. On December 30, 1928, she performed a solo recital at Carnegie Hall.  A New York Times critic wrote: “A true mezzo-soprano, she encompassed both  ranges with full power, expressive feeling, dynamic contrast, and utmost delicacy.” But despite this success, her engagements were stagnating; she was
still performing mainly for black audiences. 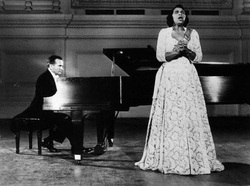 Marian then obtained a scholarship through the National Association of Negro Musicians to study in Britain. On September 16, 1930, she performed at London’s Wigmore Hall. She returned to the U.S. only to return to Europe again, on a scholarship from the Julius Rosenwald Fund. She was intent on perfecting her language skills (as most operas were written in Italian and German) and learning  the art of lieder singing. At a debut concert in Berlin, she attracted the  attention of Rule Rasmussen and Helmer Enwall, managers who arranged a tour of  Scandinavia. Enwall continued as her manager for other tours around Europe. Marian returned to the U.S. for more concerts and then, in 1933, returned to Europe again through the Rosenwald Fund. From September 1933 through April 1934,  she performed at 142 concerts in Scandinavia alone, even singing before King  Gustav in Stockholm and King Christian in Copenhagen. She received a rare invitation to sing from Jean Sibelius, a 70-year-old famous Finnish composer. He  was so moved, he dedicated his song “Solitude” to her, and saying, “The roof of  my house is too low for your voice.”She followed those concerts with appearances throughout Europe. This tour concluded in 1935 with an international festival in Salzburg called the Mozarteum. Arturo Toscanini, a very prestigious conductor, heard her sing and told her, “Yours is a voice such as one hears once in a hundred years.” Another famous impresario, Sol Hurok, also heard her sing shortly after that and made a contract with her for American concerts. 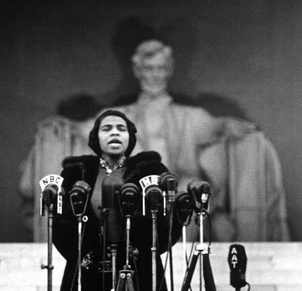 On December 20, 1935, Marian appeared for the second time at New York’s Town Hall. This time she was a great success. She also gave two concerts at Carnegie Hall, then toured the states from coast to coast. She went on to tour Europe again, and even Latin America, through 1938 – performing about 70 times a year.Throughout her life, Marian had experienced racism, but the most famous event occurred in 1939. Hurok tried to rent Washington, D.C.’s Constitutional Hall, the city’s foremost center, but was told no dates were available. Washington was  segregated and even the hall had segregated seating. In 1935, the hall instated  a new clause: “concert by white artists only.” Hurok would have walked away with  the response he’d received, but a rival manager asked about renting the hall for  the same dates and was told they were open. The hall’s director
told Hurok the  truth, even yelling before slamming down the phone, “No Negro will ever appear  in this hall while I am manager.”
The public was outraged, famous musicians protested, and First Lady Eleanor Roosevelt resigned from the Daughters of the American Revolution (DAR), who owned the hall. Roosevelt, along with Hurok and Walter White of the National
Association for the Advancement of Colored People (NAACP), encouraged Secretary of the Interior Harold Ickes to arrange a free open-air concert on the steps of the Lincoln Memorial for Easter Sunday. On April 9, Marian sang before 75,000
people and millions of radio listeners. About her trepidation before the event, she said:“I said yes, but the yes did not come easily or quickly. I don’t  like a lot of show, and one could not tell in advance what direction the affair  would take. I studied my conscience.  As I thought further, I could see that  my significance as an individual was small in this affair. I had become, whether  I like it or not, a symbol, representing my people." Several weeks later, Marian gave a private concert at the White House, where President Franklin D. Roosevelt was entertaining King George VI and Queen Elizabeth of Britain. In 1943, Marian performed at Constitution Hall, at a benefit for Chinese relief. She insisted the DAR suspend its segregated seating policy for the
concert. Later, she said, “I felt no different than I had in other halls. There was no sense of triumph. I felt that it was a beautiful concert hall, and I was happy to sing in it.” In July 1943, Marian married Orpheus H. Fisher, a Delaware architect she had
known since childhood. They lived on her “Marianna Farm” in Connecticut. During World War II and the Korean War, Marian entertained troops in hospitals and bases. By 1956, she had performed over a thousand times.
In January 1955, Marian debuted at the New York Metropolitan Opera as Ulricia in Guiseppe Verdi’s “Un Ballo in Machera” (The Masked Ball) – the first black  singer as a regular company member. She was 58 years old and, feeling past her vocal prime, felt she overdid it out of nervousness. Later, in Philadelphia, she  was satisfied with her performance.
In 1957, she toured India and the Far East as a goodwill ambassador through the U.S. State Department and the American National Theater and Academy. She traveled 35,000 miles in 12 weeks, giving 24 concerts. After that, President Dwight Eisenhower appointed her as a delegate to the United Nations Human Rights  Committee. She sang at his inauguration, as well as John F. Kennedy’s in 1961.  In 1962, she toured Australia. In 1963, she sang at the March on Washington for  Job and Freedom. On April 19, 1965, Easter Sunday, Marian gave her final concert at Carnegie Hall, following a year-long farewell tour.
During her career, she received many awards, including the Springarn Medal in 1939, given annually to a black American who “shall have made the highest achievement during the preceding year or years in any honorable field of endeavor.” In 1941, she received the Bok award, given annually to an outstanding  Philadelphia citizen. She used the $10,000 prize money to found the
Marian  Anderson Scholarships. In 1963, President Lyndon Johnson awarded her the American Medal of Freedom. In 1977, Congress awarded her a gold medal for what was thought to be her 75th birthday. In 1980, the U.S. Treasury Department
coined a half-ounce gold commemorative medal with her likeness. In 1986 President Ronald Reagan presented her with the National Medal of Arts. Rather than fight much of the racism she received, despite her enormous popularity, Marian preferred to avoid situations whenever possible. In Europe, she was welcomed into the finest hotels and restaurants, but in the U.S., she
was shifted to third- or fourth-class accommodations. In the South, she often stayed with friends. Simple tasks as arranging for laundry, taking a train, or eating at a restaurant were often difficult. She would take meals in her room and traveled in drawing rooms on night trains. She said:  “If I were inclined to be combative, I suppose I might insist on  making an issue of these things. But that is not my nature, and I always bear in  mind that my mission is to leave behind me the kind of impression that will make  it easier for those who follow.”
Early on, she insisted on “vertical” seating in segregated cities; meaning black audience members would be allotted seats in all parts of the auditorium. Many times, it was the first time blacks would sit in the orchestra section. By 1950, she would refuse to sing where the audience was segregated. In 1986, Orpheus passed away. In July 1992, Marian moved to Portland, Oregon, to live with her nephew (by her sister Ethel), conductor James DePriest. The following spring, she suffered a stroke and was restricted to a wheelchair. OnApril 8, 1993, Marian Anderson died of heart failure, at the age of 96. In
June,  over 2,000 admirers attended a memorial service at Carnegie
Hall